I’ve decided to do an occasional blog on my gigs and today I’m starting off with a gig I did on the 20th September in my hometown of Ely.

The picture is of me and the wonderful Treana Morris as we played to the packed room of supporters and music lovers.

They were mainly our own songs written over the last couple of years with the help of Sean Genockey and John Hogg but with a couple of covers, in particular the song ‘Emmylou’ by the band First Aid Kit which is one of my favourite bands and who I saw at the 2018 Cambridge folk festival!

We also sang a song, written by Treana, which was so new I needed the lyrics to remember the words- it’s a wonderful song called ‘Honesty Takes Time’.  I really enjoyed singing this one, and I hope you will all enjoy listening to it if you ever manage to catch me at a show!

It was a really great evening and I would like to say thanks to several people.  Firstly, Dave at Julia’s Tearooms who helped me set the gig up. The set was split into two parts as included in the ticket price was food which people were served at the interval. It was a good chance for me to go around and say hello as I hadn’t seen a lot of the people who came to see me for ages. I’d recommend anyone in the Ely area to visit the music nights at Julia’s as the room is great and the food excellent. You can find out the upcoming dates on the Julia’s Facebook page.

Dave Streatfield who first put me in touch with Julia’s as a possible venue and Neil Porter-Thaw without whom we would not have had a piano-and those of you who have seen me before know that songs like ‘Only Human’, ‘From the Other Side’ and ‘Little Red’ are piano songs.

The evening was really made special by the audience and I’d like to thank everyone who made it to the gig. It took place in a crypt which was a new experience for me, but the support and kindness of those who packed into the room was so appreciated by both myself and Treana.

Also thanks to the legendary Stuart Lyon who made the trip from London to see me-again! Stuart is promoting Lilly Hiatt at Nell’s on 6th November and has asked me to provide support. Lilly is the daughter of famous established singer-songwriter John Hiatt and is a great artist in her own right and is making the trip from Nashville with her full band. I’m looking forward to seeing her as well as playing again in front of the knowledgable and supportive crowd at Nell’s. You can buy tickets for this gig from my website in the gig section! 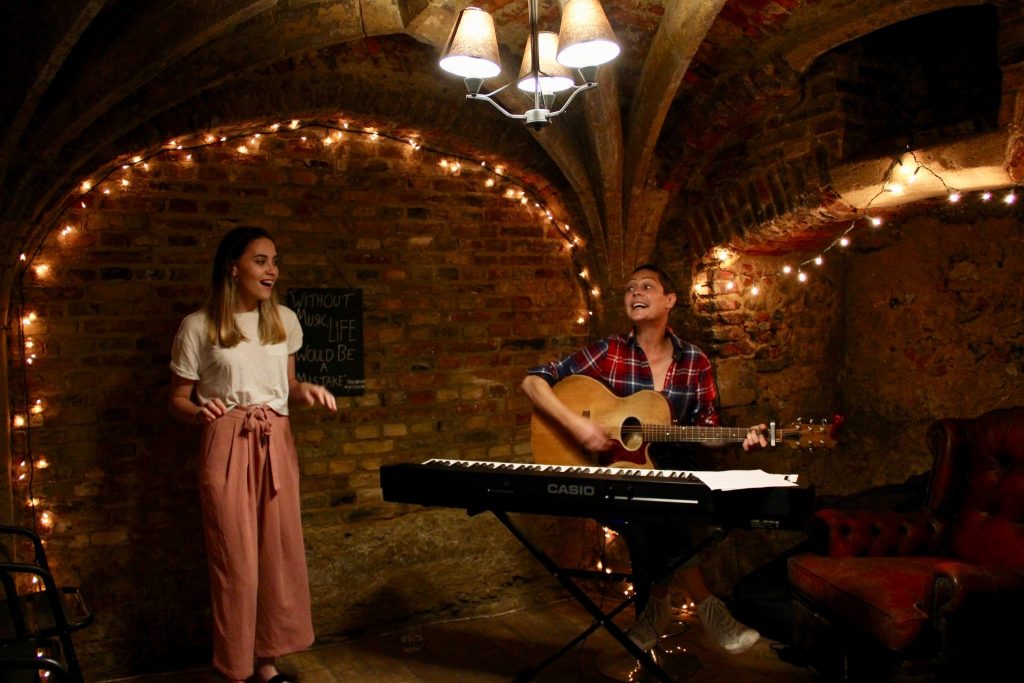