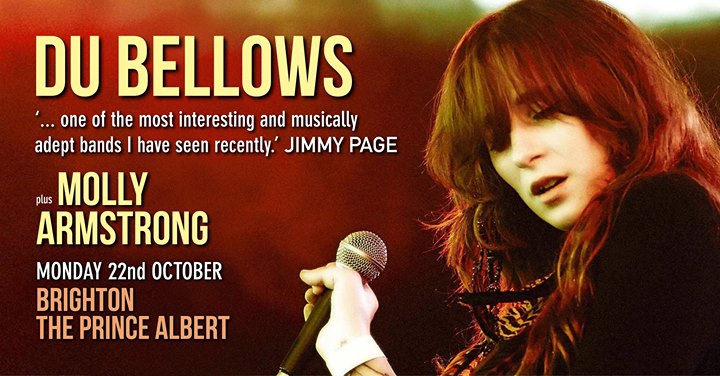 DU BELLOWS and MOLLY ARMSTRONG showcase the talents of two of the UK’s brightest up and coming young female singers for what promises to be an unforgettable night out in Brighton. DU BELLOWS are a powerful live act from West London, this four-piece is led by Merthyr-born Jade Danielle Williams (The Voice Contestant 2018, Team Tom)– who as vocalist and lyricist – acts as the band’s lightning rod, front of stage and lost in the music. Capable of ranging from acoustic subtlety to a fully fuzzed loudness, Jade’s voice brings an irresistible warmth to the imaginative harmonics of Du Bellows’ live shows that has compelled Jimmy Page of Led Zeppelin to say that “there is a cosmic counterpoint alive and well here”.
Appearing with DU BELLOWS will be 20 year old singer songwriter MOLLY ARMSTRONG originally from Cambridgeshire with Brighton based TREANA MORRIS have appeared recently with Lilly Hiatt and Chris Spedding to great acclaim. ‘Building our own Nashville’ page described her as ‘A confident performer … this was a chance for Molly to shine in front of a larger audience and she took it willingly, the audience loved her.’